Western Australia (WA) has a globally unique biodiversity characterised by significant regional endemism, meaning that we have plants and animals that only live in a particular location. This is due to the State’s geographical expanse, climatic diversity, areas of relative wilderness, regions with extremely nutrient-impoverished soils, and the fact that significant areas of WA have not been covered by sea or glaciated over geological time.

By way of example, there are more species of flowering plants in the Fitzgerald River National Park than in the United Kingdom, contributing to the South West of WA being one of only 34 Global Biodiversity Hotspots (and the only in Australia), defined as geographical regions that have at least 1,500 vascular plant species and have lost at least 70% of their original supporting habitat. 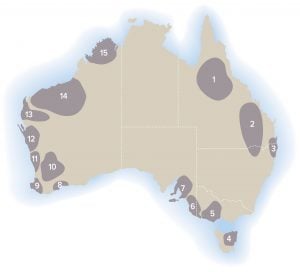 Western Australia has many important economic and social assets

Ecosystems and species are under threat

High value biodiversity within the State is at escalating risk though a range of processes including:

As a consequence, a growing number of ecosystems and individual species are under threat. This, in turn, has triggered an ever-increasing suite of regulatory controls that are considered to result in delays for the approval of projects.

The challenge: how to integrate social and economic development with strategies for effective biodiversity management

It is an ongoing challenge that has multiple complex issues and trade-offs.  The resolution requires a robust, rigorous and defensible scientific information base. However, the current status of information and knowledge about WA’s biodiversity is often unclear because its collection and management is fragmented across multiple industry, government and research organisations and there are no established mechanisms for aggregating and synthesising the data.

WABSI is enhancing knowledge, informing better decisions and helping to overcome the challenge

Development, with the protection of biodiversity, can only occur with robust scientific information. This enables decision makers to avoid and minimise impacts and, where necessary, develop complementary management strategies, such as biodiversity offsets and restoration to manage residual impacts.

WABSI will contribute to this need by providing more certainty around the decision making processes. Greater knowledge enables efficient decisions that take account of the needs and certainty of all stakeholders.