Over the next three years, Bronte, based in Albany at UWA’s Centre of Excellence in Natural Resource Management (CENRM), will provide critical information about how different types of urban areas differ in their ability to support animal biodiversity.

The western ringtail possum and quenda will be used as case studies in the research to discover if residential areas can provide a valuable, novel habitat for mammal species that are conservation dependent.

“I’m really thankful for the opportunity as the scholarship has enabled me to widen my research to include other mammal species such as pygmy possums and native bush rats,” said Bronte.

The Institute is a joint venture between regulators and leading W.A. research organisations. The scholarship, valued at $35,000 over three and half years, will help improve planning decisions to secure a better balance between urban development and conservation.

The project was developed in collaboration with several end-users to ensure that the research generated has important management applications. Partners include the Department of Biodiversity, Conservation and Attractions (Albany District), the South Coast Ringtail Working Group, Oyster Harbour Catchment Group and the City of Albany. 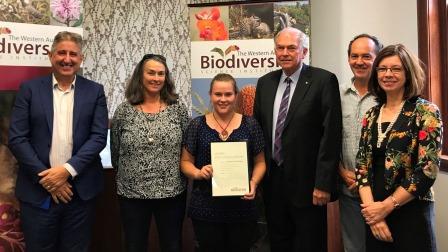